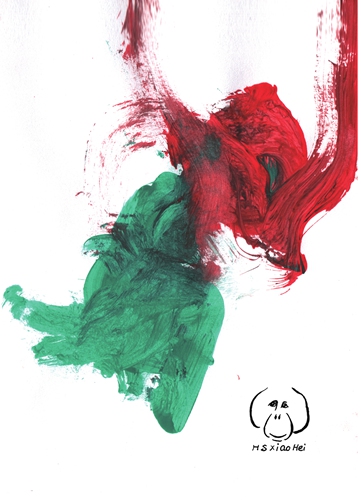 A painting created by Xiaohei, one of the orangutans at the zoo Photo: Courtesy of the Nanjing Hongshan Forest Zoo 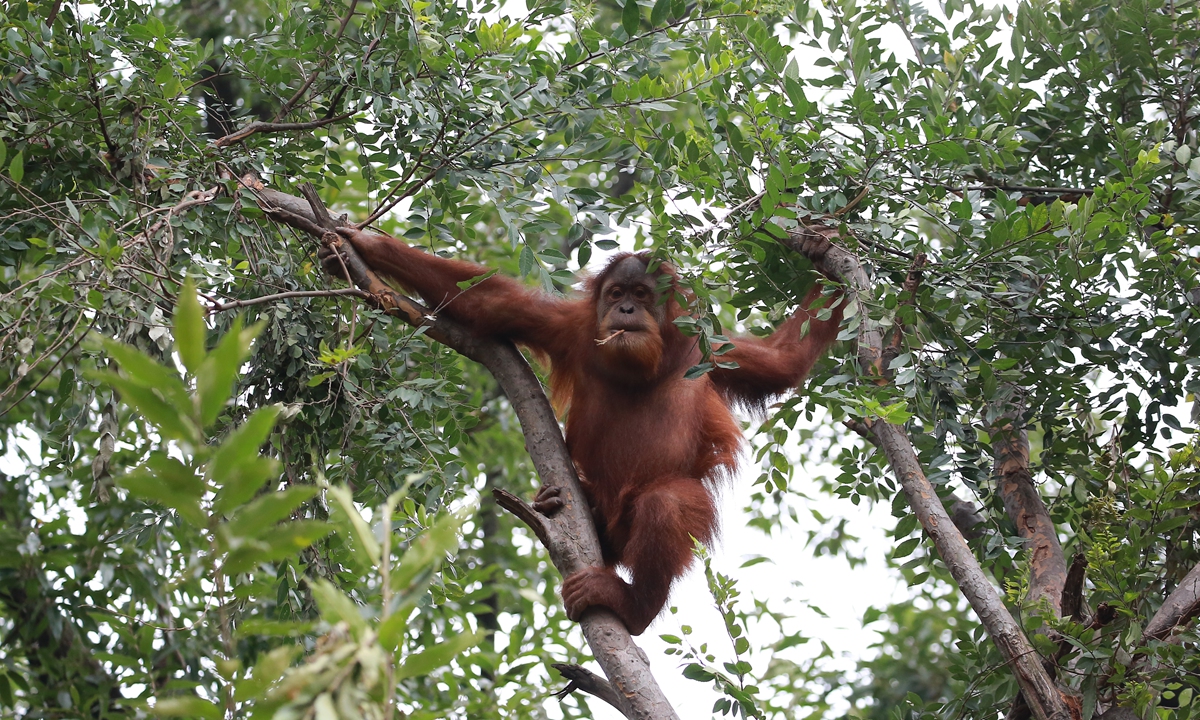 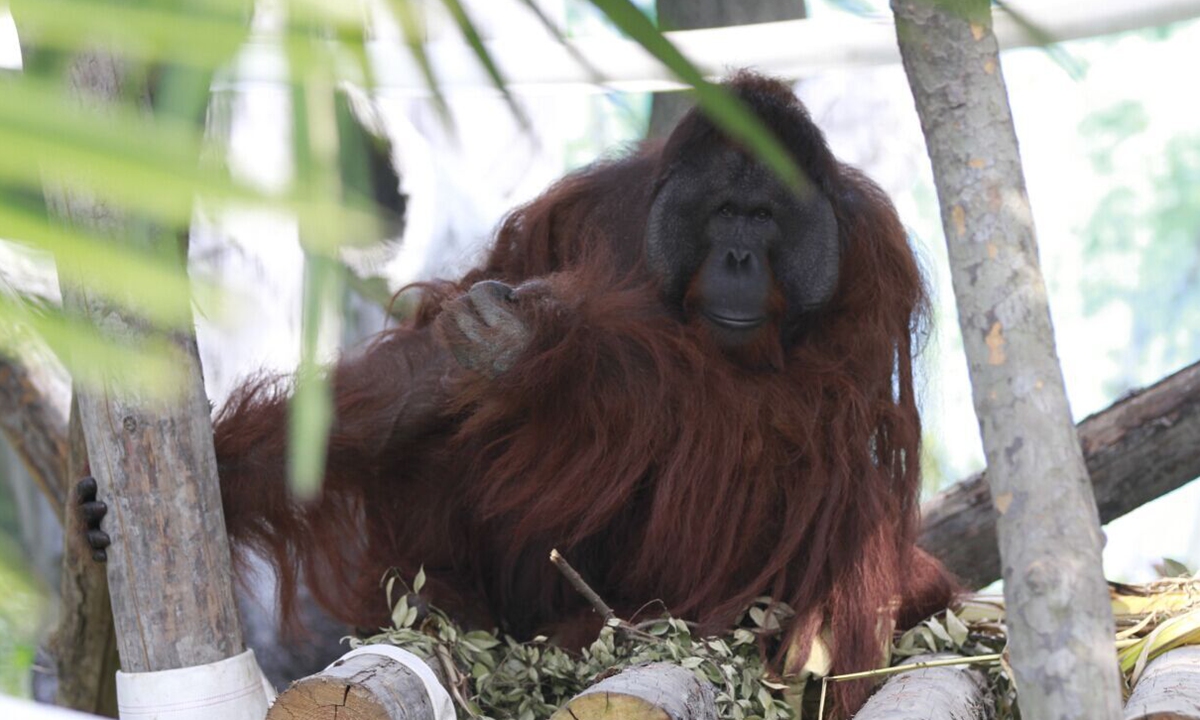 In mid-November, a zoo in Nanjing, East China's Jiangsu Province, had an unconventional book exhibition displaying a pile of paintings created by orangutans to arouse people's awareness of the endangered species' plight."These great apes share 96.4 percent of our genes. They are highly intelligent creatures. Once we taught them how to use a brush they immediately master it," Shen Zhijun, director of the Nanjing Hongshan Forest Zoo said at the opening ceremony.Orangutans, a species listed by international conservation organizations as at extremely high risk of extinction, are getting the help they need to keep the species alive at the zoo in East China's Jiangsu Province. Along with other animals, the zoo has been endeavoring to make them feel at home and keep their survival instincts sharp while fulfilling its role of teaching people to respect wildlife.Known as "the man of forest" in their original habitat in Southeast Asia, the lowland forests where orangutans reside are quite solitary. They feast on wild fruits such as lychees, mangosteens, figs, and slurp water from holes in trees, where they make nests to sleep at night and rest during the day.To ensure these orangutans do not forget their natural ways, the Hongshan Forest Zoo has created rich, lush and varied environments to simulate the orangutans' native environment. "For example, we use different foods to stimulate their sense of taste, so that the natural instinctive behaviors in their genes can be expressed.""After caring for them for a while, one day we found out that those orangutans began to pick off the branches and start building a nest on the ground. Sometimes they bring the branches back to their bedrooms and try to make a bed," said Shen.Based on Orangutan Conservancy organization data in 2020, orangutans are critically endangered considering the species' population reduction, shrinking geographic range, and population size. Data from World Wildlife Foundation (WWF) shows that a century ago there were probably more than 230,000 orangutans in total, yet the number of two common species, Bornean and Sumatran orangutans, are respectively estimated at about 104,700 based on updated geographic range (endangered) and 7,500 (critically endangered).Taking an active roleIf you unfold a map of the Hongshan Forest Zoo, you can find that forest covers 85 percent of the zoo. Besides the orangutans, there are more than 260 species and more than 3,000 rare animals from all over the world living there.Back when he took office in 2008, Shen began observing the animals almost every day. He discovered that many of the animals were not happy at all as the restricted life had made them bored, helpless and hopeless. "How to make the animals happy" became the man's top priority.From Shen's point of view, "a free environment" is of the upmost importance. He initiated a major renovation of the zoo, where the traditional "pit-style" displays of the animals were abandoned for "immersive enjoyment." They transformed 19 venues including the wolf hall, lemur island, tropical bird hall, hornbill hall, koala hall and meerkat hall.These replicas of their natural environment successfully triggered the instinctive memories of the orangutans to climb trees and build nests. Cassowaries, the endangered bird species, also gave birth to 32 cassowary chicks at the zoo.However, he disagreed with some so-called animal protection advocates call to release all animals in zoos into the wild. He described it as "completely unscientific nonsense," as some animals' habitats no longer exist due to the destruction of the human environment. "Letting them out is harming them."The greatest value of the zoo he said is to do everything possible to create an environment for these animals to retain their wildness, so that people, especially our children will learn better about the animals and get the awareness of the importance of animal protection. What's more, "If zoos can play an active role in the rejuvenation of endangered species, and if the wild habitat permits, there is an opportunity for these animals to replenish the wild population," said Shen.Back on trackAs a country with more than 1,000 known species categorized as critically endangered, endangered, or vulnerable, China has been improving its wildlife and wild conservation laws in recent years. It has introduced five national parks, covering more than 230,000 square kilometers and housing nearly 30 percent of the country's key wildlife species in October. In February, a total of 988 species of wildlife, including 517 newly added animals, are now on the amended National List of Protected Wild Animals.As for zoos across the country, the journey has transformed from the pursuit of quantity to caring for animals. "Chinese zoos started late and we will inevitably made a detour. But now our zoos are adhering to their true responsibilities: educating children to love animals, providing habitats, and treating animals well."