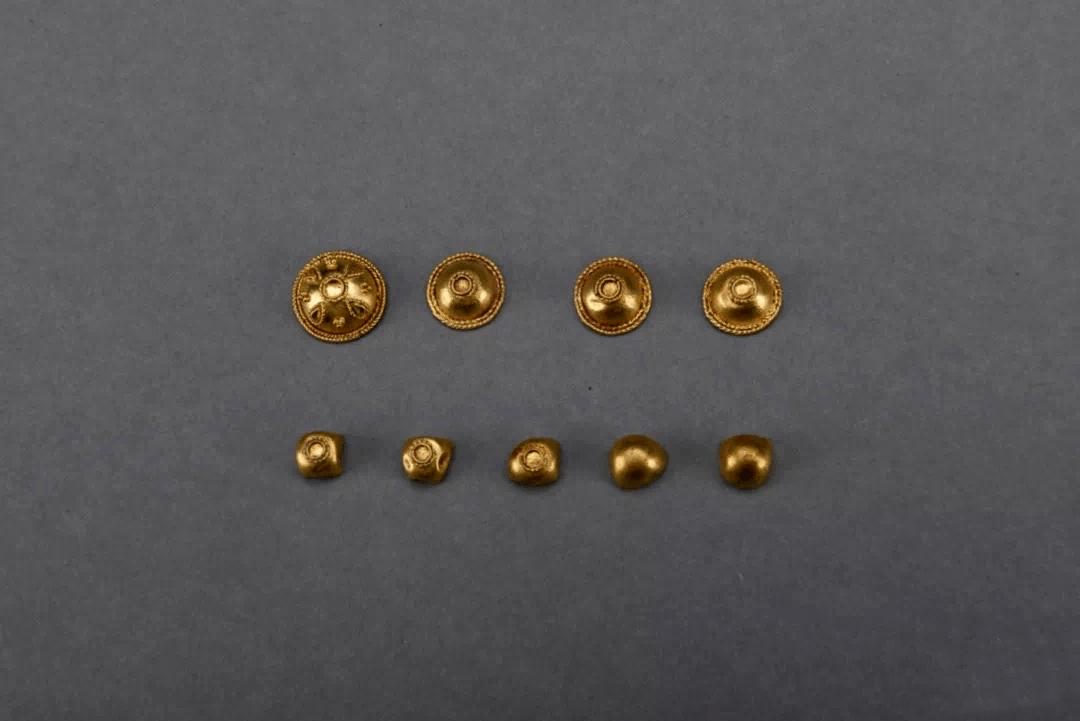 Nine button-like ornaments made of pure gold that are believed to be from the Qin Dynasty (221BC-206BC) have recently been unearthed at an ancient tomb in Xianyang, Northwest China's Shaanxi Province.The gold buttons are tiny, but there are beads on them that were created using a special welding technique that had in western Asia. “The bead welding technique thrived in the Mesopotamian civilization, so its appearance in Qin Dynasty gold objects shows that Qin people had contact with western Asian cultures,” Zhao Xuyang, the team leader of the archaeological project under the Xianyang Institute of Archeology, told the Global Times on Thursday. Experts believe the buttons were likely to have been accessories on clothing. The discovery of the Qin gold buttons can help archeologists to spot cultural and commercial exchanges between the East and the West that happened even earlier than the ancient Silk Road trade route. “They help us to explore the cultural exchanges between China and the West, and the routes of communication,” Zhao added. The nine buttons have intricate details such as patterns like water drops and bars with a rope-like texture. The bead making process was complex, it suggests the Qin dynasty’s handicraft industry, particularly using gold, was well developed. Gold items first appeared in the Shang Dynasty (c.1,600BC-1,046BC). “Gold and silver objects emerged in the mid-phase of the Shang Dynasty, but it was mainly about putting the gold on something, or wrapping it with something. It was nothing like the highly technical design of gold bead welding,” said Zhao. The buttons were found scattered inside one of the six ancient tombs that were found during a city regeneration plan that started in August this year. “The ‘learned culture’ discovered in the Qin Dynasty tombs can also reflect open-mindedness and a spirit of pragmatism in accepting the unfamiliar,” Zhao added.